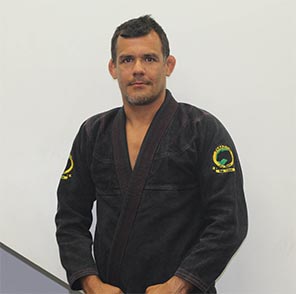 Ricardo "Franjinha" Miller has being teaching and competing for the last 15 years with many titles in regional, national and international competitions. With his black belt, Ricardo set for himself challenges extending beyond Brazil. In 1996 he came to the United States to compete and to teach. He proved to be successful at both. With American partner Mike Florimbi, the Paragon Academy of Martial Arts was founded in 1998 in Santa Barbara. Under Ricardo’s hands-on direction as coach and fighter, Paragon Santa Barbara has become a powerhouse for Brazilian Jiu-Jitsu instruction in California. Ricardo and competitor-level students have dominated in regional, state, and international tournaments. In addition, Paragon has become a community force for recreational Jiu-Jitsu, a resource for law enforcement, and developer of ongoing physical training and self-defense programs for young people, adults, seniors, and women. With the success of the Santa Barbara school, "Franjinha" opened a Ventura location as well as affiliate schools in Lompoc and Santa Maria.